Garden and Outdoor, The Gardener |

Informally, cucumbers are known around the world as cukes, but in botanic circles Cucumis sativus is the preferred version.

As you can see from the leaves and flowers, they belong to a large family of vegetables that includes their cousins: melons, squashes, pumpkins and gourds.

English or Dutch cuke varieties are long and cylindrical with edible skin, and are usually grown for slicing. Then there are the smaller versions like ‘Beta Alpha’ or ‘Mini’, which are often pickled and which have thicker skin and more noticeable prickles. Cucumber plants are sprawling vines that can take up a bit of space and need to be trained vertically for the best results. Look out for the bushier varieties for small gardens as well as for containers and hanging baskets. The best way to support them is to make a frame consisting of poles at either end of the bed with additional poles placed alongside each plant. Run wires between the poles so that the growth from each plant can be wound around the wires. The tendrils will soon attach themselves to the wire. You may have to secure the plant initially but don’t make the ties too tight. For cukes grown in pots, you will also need to make a frame to support their growth.

They grow best in fertile, well-draining but moist soil. Add a generous amount of compost to the bed before planting.

They prefer full sun but can also tolerate semi-shade.

Plenty of it. Flood the base of the plants, especially in hot and dry periods, and avoid getting the leaves wet or it could cause mildew. Keep the soil evenly moist with regular watering and don’t let the soil dry out. Water immediately if the leaves are wilting. Be consistent with watering as this may affect the fruiting outcome and the fruit may be bitter or oddly shaped.

To save water and prevent the soil from drying out too quickly, and to keep the soil aerated, add a good layer of mulch around the base of the plants.

Cukes are one of few vegetables that can still be sown mid-summer, as their planting window stretches from September to December in most areas. It is best to sow seed directly into the soil rather than in seedling trays because the seedlings are soft, which makes transplanting difficult. Seed should germinate within seven days and the soil should be kept consistently moist during germination. Sow seeds at the base of a vertical support or on a mound at 15 – 20cm intervals.

Thin out when seedlings are around 10cm tall, leaving the strongest plant. Cut weak seedlings off at soil level with scissors to avoid disturbing the roots of remaining plants. 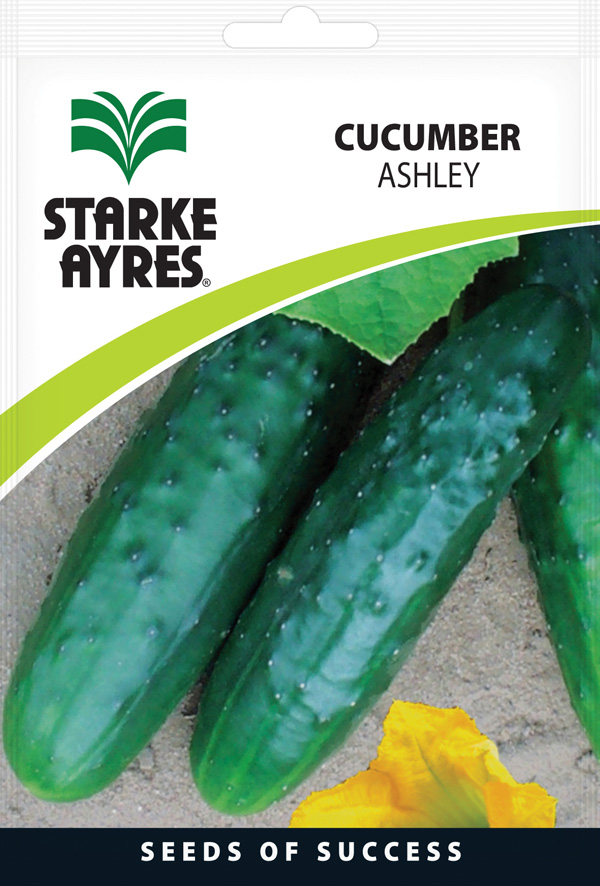 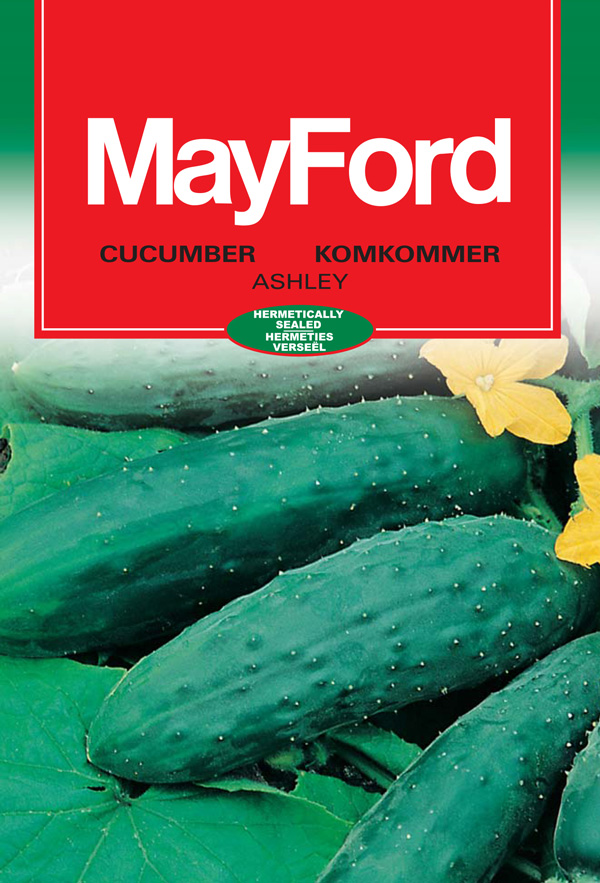 Pinch off the growing points when the plants are 60cm high to encourage side shoots, as most of the fruit develops from this growth, or allow the side shoots to simply develop as the plant grows. Cucumbers produce both male and female flowers on the same plant and are self-pollinating. The male flowers usually appear first followed by the female flowers, which have a small fruit behind the calyx. The English or Dutch cucumbers tend to produce predominantly female flowers.

Cucumbers are relatively free from pests but can suffer from downy mildew when conditions are humid but cool, while powdery mildew is more prevalent during dry periods. Use a broad-spectrum fungicide. The ‘Beta Alpha’ cucumber ‘Sweet Crunch’ is resistant to mildew.

Their refreshing quality makes them a valuable beauty aid: fresh slices of cucumber on the eyes, as well as on the forehead and cheeks, reduce puffiness and swelling. That’s because the flesh of the cucumber contains ascorbic acid (vitamin C) and caffeic acid, both of which help soothe skin irritations, prevent water retention and reduce swelling. The high water content of cucumber makes it naturally hydrating and cucumber juice is often recommended as a source of silica to improve the complexion and health of the skin. Cucumber can help relieve conditions like arthritis and gout because it helps to eliminate uric acid that causes inflammation in joints.

Just a note of caution: some people are very allergic to cucumbers. 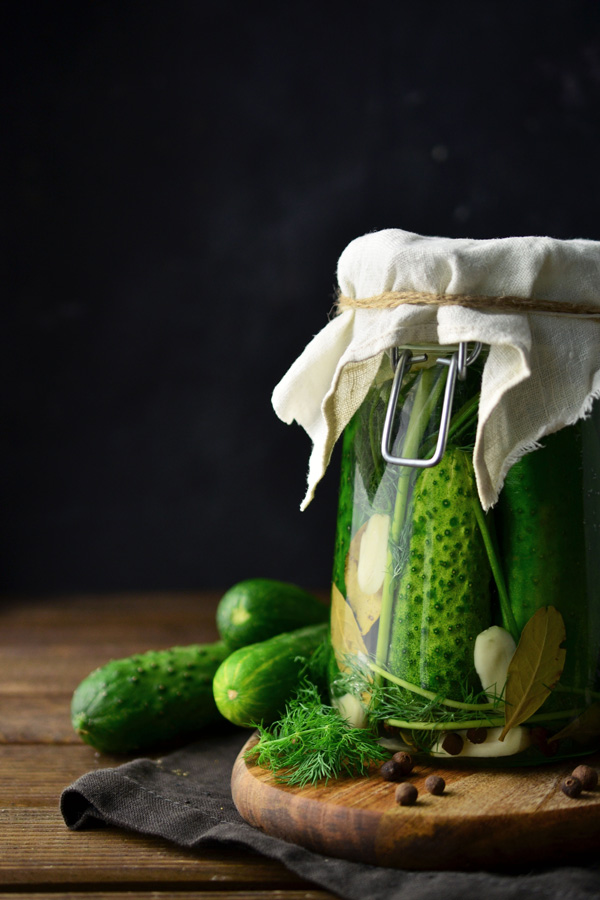 Cucumbers store well in the crisper of a refrigerator and should be picked as soon as they mature. Leaving maturefruit on the plant causes it to lose its vigour. See below for how to pickle the smaller varieties. They are well-known as a salad ingredient and a tangy classic combo of cucumber, yoghurt, garlic and salt and pepper is a must for lamb and beef.

A quick and easy way to store mini cukes for a longer time than the summer season is to pickle them in vinegar and water and spice it up the way you like it.

Sterilise jars ready for pickling. Choose healthy cukes with no spots or blemishes and scrub them with a brush to reduce the spines to bumps and get them really clean. Pack into the jars.

In a large pot, heat up vinegar and water at a ratio of 1:1 with salt and sugar if you are sweetening up your pickles. Use white wine vinegar or apple cider vinegar. For every 400g jar you will need 2/3 cup of liquid and 1 tablespoon salt. Add your favourite aromatics: 1 tablespoon each of coriander seeds, mustard seeds, whole peppercorns and a few bay leaves. You can use them all if you wish. Bring the brine to the boil, then simmer for 10 minutes. Pour the hot liquid over the cukes to fill the jars. Seal and cool, then store in the fridge. They will last for around 2 months in the fridge.

For more on gardening: www.thegardener.co.za 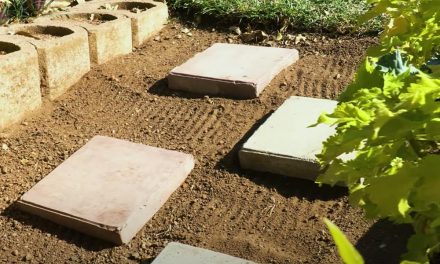 DIY Transform Your Garden By Making Your Own Garden Pavers 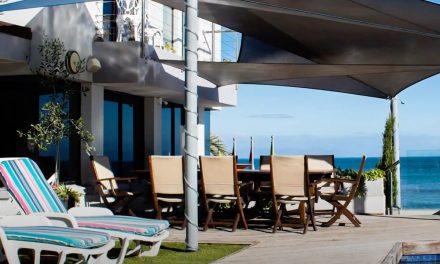 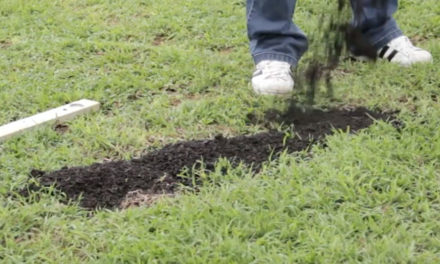 How to top-dress a lawn 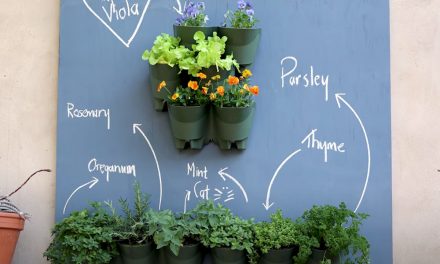